During summer especially it seems like the only word some people know:

(The guy at the wedding reception to anyone within earshot when he gets stuck talking to the outcast uncle) “Should we head to the bar and grab a cocktail?”

We have nothing against beer, and certainly not wine. (We’ll cover the history of these in upcoming columns). I went to college in Vermont when the micro-brew scene was still in its moonshine phase and people thought a growler was short-term for an angry drunk. In my more recent adult years, I’ve tried to refine my oenophilic tastes especially since wine travel can land you in places you might never otherwise think of going like South Africa.

But what’s with the word ‘cocktail’ itself?

I took five years of Greek and Latin in high school so words are all about breaking them down (no my wife still can’t beat me at Scrabble). When you split it apart on the surface, cocktail doesn’t sound like anything befitting of this column. When you dig deeper, however, cocktail like most words has a savory if unconfirmed evolution. It’s also the only drink that has it’s own hour of the day. You don’t invite people out for “Beer Hour” or “Milk Hour”.

If we have a singular passion at Find Everything Historic it’s discovering the undiscovered, and uncovering the unrecognized and unappreciated granular connections to history that surround each of us everyday. Everyone following our Live Historic adventure knows our informal tagline: Architecture, boats, cars, food, fashion, photography, literature, music, you name it. Everyone loves something historic.

So we couldn’t spend the last cocktail hours of summer without sharing the very reason you’re sitting around with friends and sipping a Cuba Libre (rum and Coke) in the first place. Live Historic University Mixology 101 is now is session. 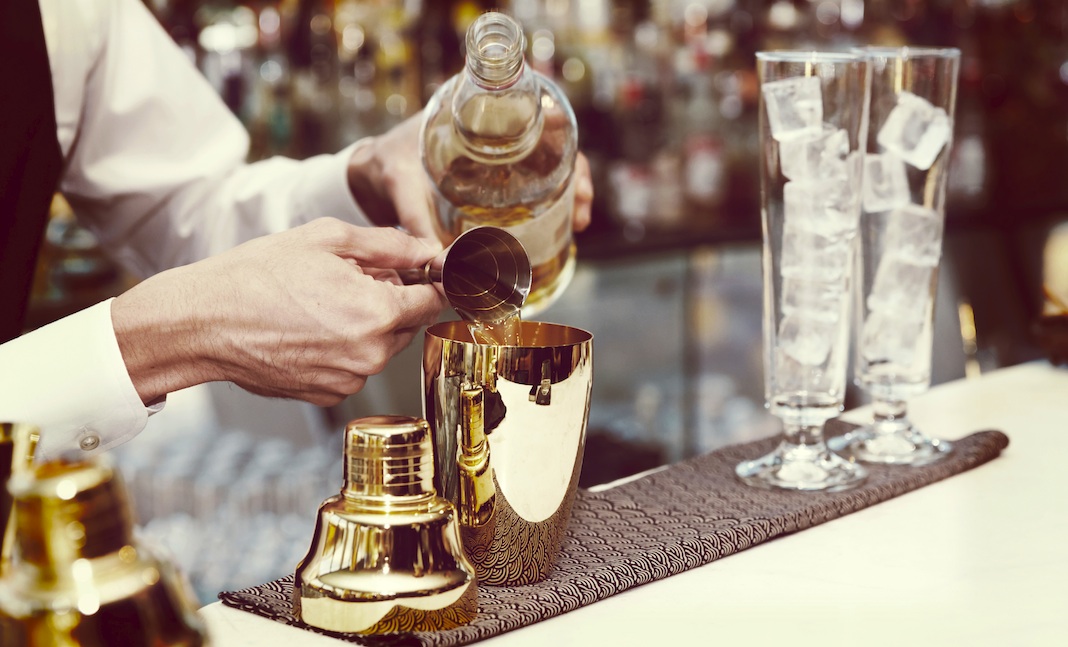 When Was The Cocktail Born?

Like most things historic, the genesis of the cocktail depends on whom you ask. Mixed drinks are as old as drinking itself (water and wine), but as far as we can tell twizzling multiple liquors with a stick didn’t make it’s entrance into the history books until the late 17th century.

In his 2007 book, Pioneer Of The American Bar, historian David Wondrich credits the first published cocktail recipe to Major-General Sir James Edward Alexander in 1831, a Scottish soldier, traveller and author, whose plea for brandy, gin or rum mixed with “…a third of the spirit to two-thirds of the water; add bitters, and enrich with sugar and nutmeg…” was no doubt inspired by the same “Man what a long day” escapism as today’s modern cocktail hour. Traveling the globe in ships held together by tar in the early 17th century wasn’t a Carnival cruise.

Since Alexander’s first pioneering concoction there are few elixirs that haven’t been mixed together in the name of ever-more intoxicating ‘creativity’ (hello Long Island Iced Tea). I once mixed 100-year old Antarctic moonshine with Orange Tang since that was the only was to flush it down without feeling like I was drinking diesel fuel. Red Bull has made fortune swizzling energy drinks with any liquor it can co-brand with. 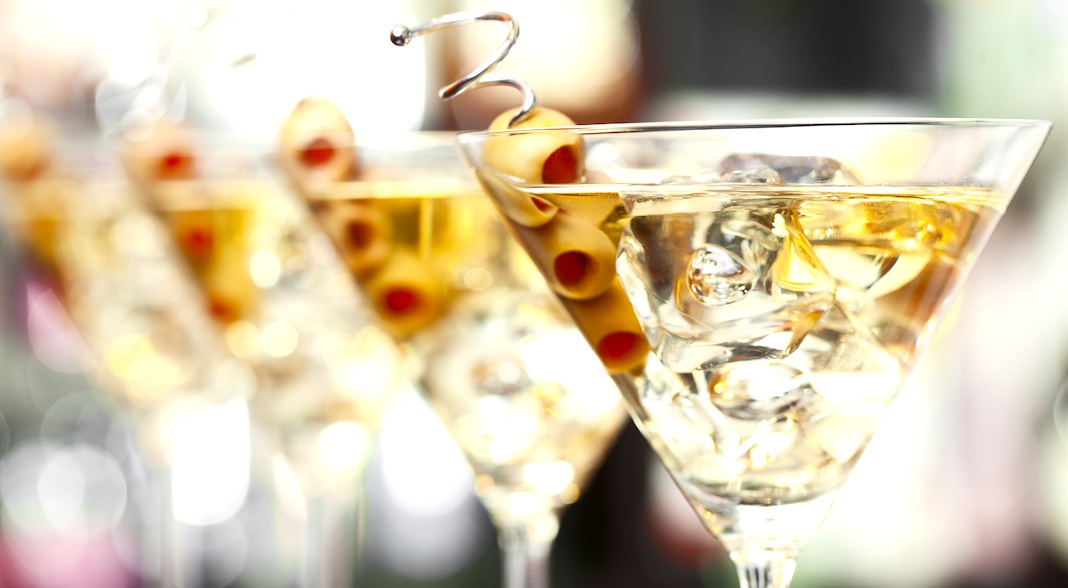 So What’s With The Cock’s Tail?

The word cocktail is biblical in its ambiguity of origin. Our editors dug deep into the history books and no one could confirm its original birth certificate. The one common thread we found was the rooster’s tail, which is alternately credited with being the foundation of the modern cocktail as a garnish for a Colonial drink, a metaphor for the resulting colors when you combine various liquors, or a mixing stick—though it’s hard to imagine that anyone willingly polluted their drink with a feather that grows out of a chicken’s derriere no matter how hard a day they had.

Another corroborating reference of the cock’s tail origin comes from a story published in 1936 in the aptly named British rag, Bartender, which chronicles English sailors being served mixed drinks in Mexico during their early explorations, stirred with a Cola de Gallo (cock’s tail), which was a root shaped like the bird’s tail. Apparently in the early 19th century no one had heard of a spoon. Personally, I’d rather mix any drink with my own finger than a root or a cock feather.

The most entertaining if unbelievable story about where the word ‘cocktail’ began is not surprisingly a bit cheeky and salacious. In the 18th and 19th centuries it was a common practice to ‘dock’ (cut off) the tails of draft horses the same way many show dogs are docked today. This caused their tails to stick up vertically like a cock’s tail. As the story goes, when drunk the original mixed drinks made the consumer’s ‘cock’ stand up at attention in the same manner as a draft horse’s tail. You can fill in the rest of the story from there. 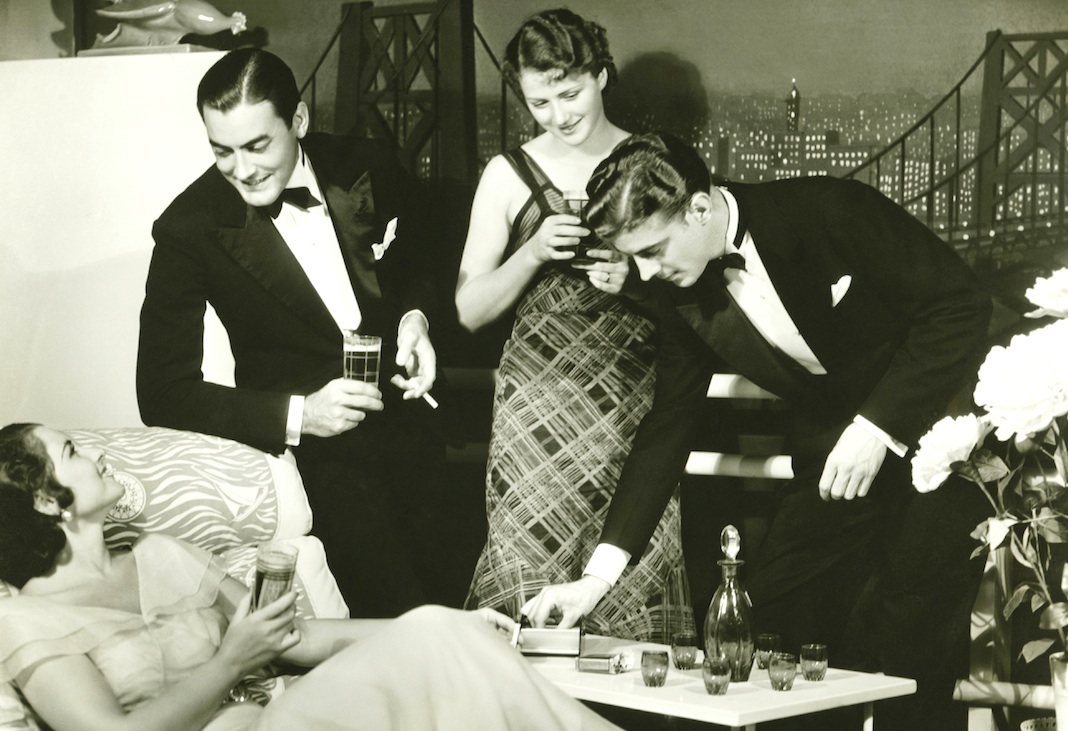 How Did The Cocktail Get Its Own Hour?

Though we’ve been allies for centuries now, Britain and America still compete for supremacy on many fields: The financial capital of the world (London or Manhattan?), who’s football is the true ‘football’, and who has the crappiest winter (Maine or Manchester).

On the question of where the ‘cocktail hour’ began, we’re going to have to give this one to the Brits, even though we’d love to think it started one Gatsby-esque evening in Newport as the titans of American business restructured the modern world over Cuban Cohibas and dirty martinis.

Perhaps not surprisingly for the  country that invented the Gin and Tonic, it was all about moving up the clock. “What one needs is some kind of a party that starts at half-past five,” postulated British author Alec Waugh in his now famous 1974 article in Esquire magazine, “that lasts ninety minutes, at which alcohol is served, but not too much food.”

For the leisurely British aristocracy in the early 20th century, ‘cocktail hour’ provided a socially-acceptable reason to start drinking earlier (who wants to end a long day with tea?), and saucing it up outside of the stuffy conversational confines of a formal dinner table. It didn’t take long for people to discover that it wasn’t bad for business either. Inebriation is utterly democratic regardless of social status so barriers broke down. Inhibitions were diluted. Deals got lubricated.

For obvious reasons, it didn’t take long for the American aristocracy to import Britain’s pioneering invention. It quickly trickled down across the US down like moonshine on fire. By the 1950s there were few men who didn’t come home from a long day at work, throw a few ice cubes into the highball glass, and kick back on the couch before dinner with a little something to take the edge off.

Ultimately, the beauty of history isn’t where it originated but how we honor and carry it on in our present day lives. So don’t let your kids go back to school without raising a glass to the history of one of the world’s most famous libations. Here are a few of the classics: