One of my favorite movies of all time is The Talented Mr. Ripley. If you haven’t seen it yet, you’re missing an American cultural classic.

Jude Law plays Dickie Greenleaf, a Gilded Age trust funder living the summer high-life in southern Italy with fellow one-percenter Marge Sherwood played by Gwyneth Paltrow. Their parents are the titans of late 19th and early 20th century American industry. Cate Blanchett and Philip Seymour Hoffman, also name-dropping their way around Europe for the summer, parachute in at just the right moments—jazz concerts in Milan, film festivals in Cannes, the usual stuff. Proletarian Tom Ripley (Matt Damon) ends up somehow gamely leaching along. The film gets thoroughly sordid and irresistible from there.

I love the movie because it’s like watching an old family film in 8 mm that I missed by three generations. My ancestors landed in Maine over 200 years ago. They started with nothing, worked hard, took risks, and eventually had a few ideas that transformed American agriculture in the late 1800s. Barely three generations after emigrating from Europe, all of a sudden there were family mansions and compounds in Newport, Long Island, Chicago, south Florida, Aiken, and the Adirondacks.

My family legacy epitomizes the American Dream. My great-uncle, James Deering, whose company invented the reaper, personally built what is now one of the finest examples of Gilded Age architecture called Vizcaya in Miami. We’re talking Gatsby-esque ballroom parties here, European finishes and artwork shipped across the Atlantic, and the finest architecture, construction, and craftsmanship of the era.

Fast forward to the present, my family’s financial Gilded Age is long gone. But the architectural legacy remains and is one of my most direct, physical connections to my past. My wife and I got married at a family compound on Lake Champlain in the Adirondacks that my great-great grandfather built int he late 19th century when you could only travel their by horse or boat. My other great-grandfather’s ‘winter’ house in Aiken, South Carolina called Banksia is now home to the Aiken County Historic Society. This winter we’re taking a private tour of Vizcaya—so I can see where my grandmother spent her summer vacations before the estate was turned into a museum and botanical garden open to the public in 1953. If that’s not living history I don’t know what is.

So in celebration of the American Gilded Age and its lasting architectural legacy throughout the country, here’s our favorite Gilded Age estates for sale that even Dickey Greenleaf would be proud to call his own.

When the likes of Albert Eintein, JFK, Winston Churchill, and Charlie Chapman have stayed at your house you know you have the best place in town.

El Fureidis—which translates as ‘tropical paradise’—was one of only three historic compounds designed in Santa Barbara by acclaimed architect Bertram Goodhue and is one of southern California’s most iconic estates.

The estate was built in 1906 by James Waldron Gillespie, who hailed from the East Coast and came west seeking a landscape and climate in the US that rivaled that of the Mediterranean. What’s so unique about Gillespie today is that he’s a Gilded Age enigma in the Google Age. There’s scant information about his life or businesses online. On various passport applications, Gillespie alternately stated his occupation “gentleman of leisure” and “capitalist.” When you have the fortune to build an estate like El Fureidis and 100 years later there’s still no information on your whatsoever on Wikipedia you know you’ve done a masterful job staying under the radar.

El Fureidis was inspired by Gillespie’s extensive travel and his particular affinity for all things Spanish including a ‘winter’ home not far from Havana, Cuba. The estate’s imposing Roman, Persian, and Arabic architecture, exquisite interior detailing, and Spanish and Mediterranean influences throughout are a testament to his international personality and connections. Maybe it also tells us something about how Gillespie made his fortune but that’s for another blog.

Most recently, El Furedis has become best known as the location where the wedding scene between Michele Pfeiffer and Al Pacino in ‘Scarface’ was shot. Say hello to my little mansion!!

Late September in Newport, Rhode Island is one of the best times of year any place on earth. On September 29, 1871, the mayor of Newport and co-founder of the Newport Casino, Colonel George R. Fearing, gathered a group of invited guests on an empty lot at 180 Narragansett Avenue to place the cornerstone of what was to become one of the finest early mansions in America’s capital of mansions.

Colonel Fearing’s French architect based his drawings on an 18th century country house located outside of Geneva, Switzerland. Local Newport architect George Champlin Mason & Son took over the project and massaged the original drawings to create the final French Chateau design. The Orchard immediately stood apart from the other famed Newport mansions which was no small feat in an age when every titan of American industry was outdueling the other to build the most opulent European inspired estate on this side of the Atlantic. Today The Orchard remains one of the most iconic Gilded Age coastal residences on the East Coast.

Since it was built, The Orchard has been home to the descendants of some of America’s most prominent families including the son of Pennsylvania Railroad president and Mrs. Harvey S. Firestone. Since 1993, the estate has been owned by TED Talks/Conferences visionary and founder, Richard Wurman, and his wife Gloria Nagy, a best-selling author. 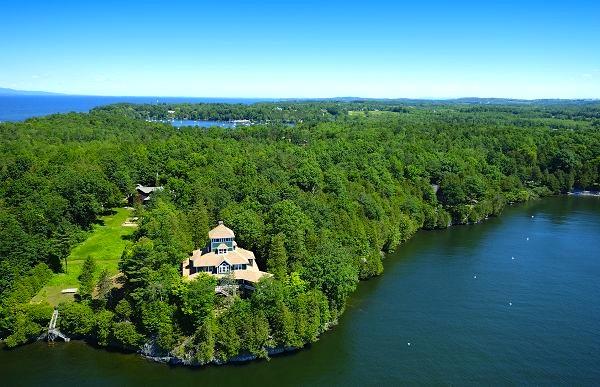 One of the great consistencies of Gilded Age architecture is how the original owners’ personal histories and business interests inspired their architectural visions. The McCray Mansion listed on our site still has the original refrigerators designed into the home by it’s original owner who made his fortune pioneering household refrigeration. Seems logical.

The Pinnacle, built by William James Van Patten on the shores of Vermont’s Lake Champlain in 1896, is yet another quintessential example of this. Van Patten’s business and political resume was extensive: drug manufacturing executive, President of Burlington’s Malted Cereals Company and the Burlington Building and Loan Association, as well as a Director of the Queen City Cotton Company. Van Patten also served as Mayor of Burlington from 1894 to 1895, and President of the Vermont State Senate in 1906.

It was Van Patten’s involvement as President of the Champlain Manufacturing Company, however, which produced wood blinds, doors and sashes, that inspired his vision for The Pinnacle. One of Lake Champlain’s most iconic and historic homes, The Pinnacle sits high on a promontory and has unrivaled views of Converse Bay, the Green Mountains, and the Adirondacks. But it’s what’s inside this historic estate that will truly knock your socks off. Van Patten’s extensive use of a variety of fine woods and extraordinary carpentry is explained by his own business interests in lumber and is one of the finest examples of original millwork that we have ever seen. The private 300’ feet of lakefront shoreline aren’t bad either.

Far From The Wolf

There are few other places in the US that are better known for classic, old money summer vacations and family compounds than coastal Maine, where America’s most prominent families from New York, Philadelphia, and the East Coast have been de-camping to escape the heat and lavishness of Fifth Avenue and Palm Beach for over a century.

Far From the Wolf was built in 1892 by John Godfrey Moore, one of Wall Street’s original titans, and is a direct play on the source of his extraordinary wealth. Moore made his fortune in lumber, the telegraph industry, and finance, and at one time personally owned the vast majority of the mountains, lakes, and oceanfront property that is now Acadia National Park, today one of the most visited National Parks in the country. To think that this was once Moore’s private domain boggles the mind. It would be like owning Yosemite National Park as your family’s personal backyard.

Moore’s grand, shingled ‘summer cottage’ was for decades considered the finest waterfront estate on the Maine coast, even compared with the ever larger family compounds being built in fashionable Bar Harbor just four miles away across the water. Other notable Far From The Wolf owners have included Frank Noyes, president of the Washington Star and a founder of the Associated Press, among others.

Did you think given the family connection that we couldn’t include Vizcaya in here?

Let’s start with the best part. Most of America’s finest Gilded Age architecture remains in private hands. Every once in a while you’ll see an article or photo spread in Architectural Digest but that’s as close as you’ll get. Drool on.

Vizcaya was formally opened to the public as a museum and botanical garden in 1953 so you can wander through its 34 ornately-decorated rooms and 10-acres of formal gardens feeling a little Gatsby-esque yourself as if you were sporting a seersucker suit and gin and tonic as the big band starts to play and the sun goes down over Biscayne Bay.

My great-uncle James Deering built Vizcaya between 1914 and 1922, and it was a personal obsession. He made countless trips to Italy and Europe with Vizcaya’s chief visionary and artistic director, Paul Chalfin, to tour the most celebrated, historic villas for inspiration and to start stockpiling antiquities and commissioned artwork. He envisioned building the most lavish estate in the country inspired by the most iconic historic properties of southern Europe. By all accounts he succeeded. Vizcaya is considered by many to be the finest preserved example of European-inspired Gilded Age architecture in the United States.