Every ancient culture had spa rituals – dating back millennia, indigenous peoples from Mayans to Native Americans bathed in hot springs and visited sweat lodges to clear the mind. Asian cultures have long used herbs, healing oils and healing touches to achieve balance. And the Greeks and Romans are well known for bathing rituals. 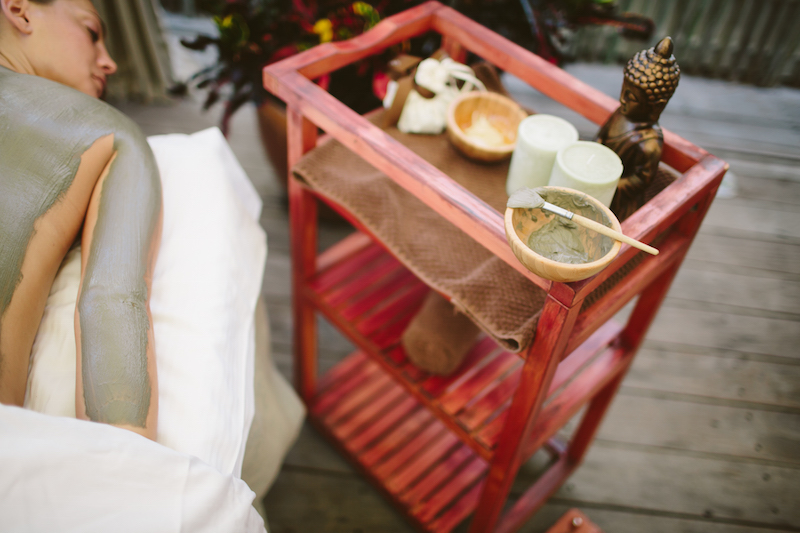 These days, many spas are turning to these ancient cultures, and blending them with new treatments to create a luxurious wellness experience. Some have been wellness centers for centuries, while others are crafting a new approach to spa treatments in a historic setting.

Valentine’s Day is the perfect time to mix indulgence and luxury – though in our book, any day is spa day. Read on for five favorites, each with a unique approach to blending the old and the new. 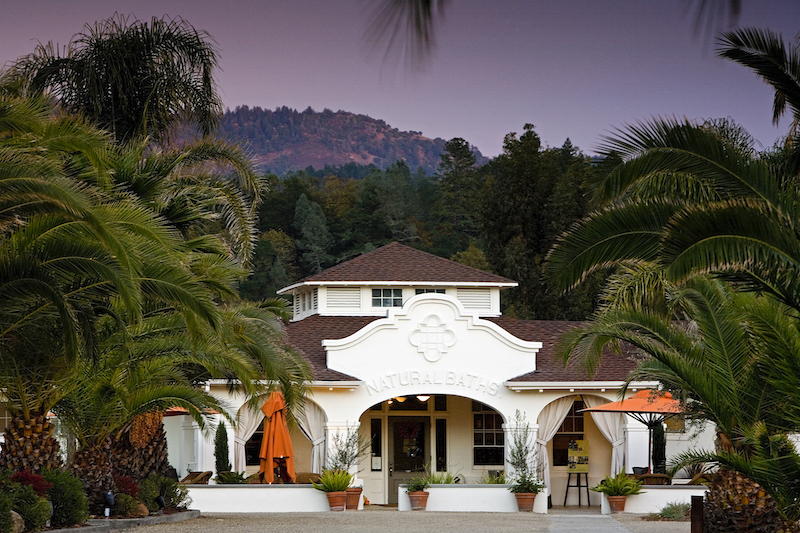 Indian Springs has been blowing off steam, quite literally, for millions of years, when thermal geysers were formed in the wake of a volcanic eruption. And, people have been visiting the area to take advantage of the resultant healing springs and volcanic mud for eons. The Wapoo Indians settled the land 8,000 years ago, calling the area “Oven Place,” creating sweat lodges and bathing in the warm springs.

In the 1860s, Sam Brannan, one of California’s earliest entrepreneurs purchased the site – and the entire upper Napa Valley, with a vision of creating a world-class resort with a spa, mud baths, pool and racetrack. Since then, it has operated as a spa continuously, changing hands several times until Pat and John Merchant purchased the property in 1988, renaming it Indian Springs out of respect for those first residents. Turn down the palm-tree-lined drive, and turn back the clock by more than a century: the Mission revival-style spa building, with a beautiful quatrefoil at the peak, dates back to 1910, and the pool and bathhouse were built between 1910 and 1913. 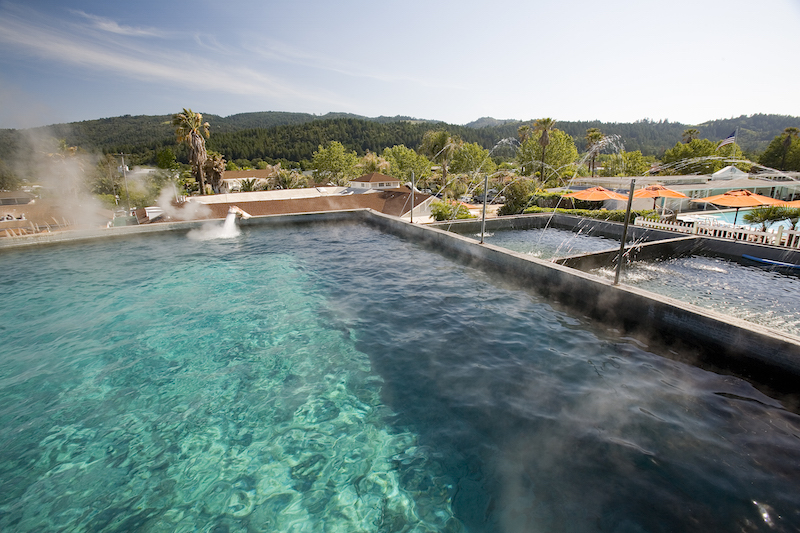 Turn back the clock even further with the signature Volcanic Ash Mud treatment. This ritual, reminiscent of the customs of the Wappo tribe, begins with a mud bath, followed by a soak in a mineral bath, a steam and concludes with being wrapped in a cozy blanket to sweat out toxins in the body. 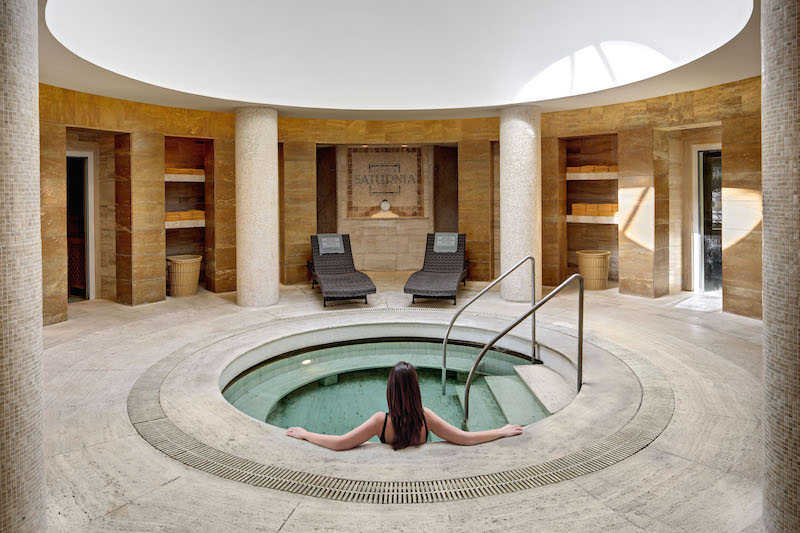 People have been bathing in the hot springs, bubbling up at a constant 99.5 degrees Farenheit, that are the centerpiece of this luxurious resort in Tuscany since Etruscan times. Romans enjoyed the waters as well — evidence of Roman baths dating back to the 2nd century B.C. can be seen in the historic village nearby. 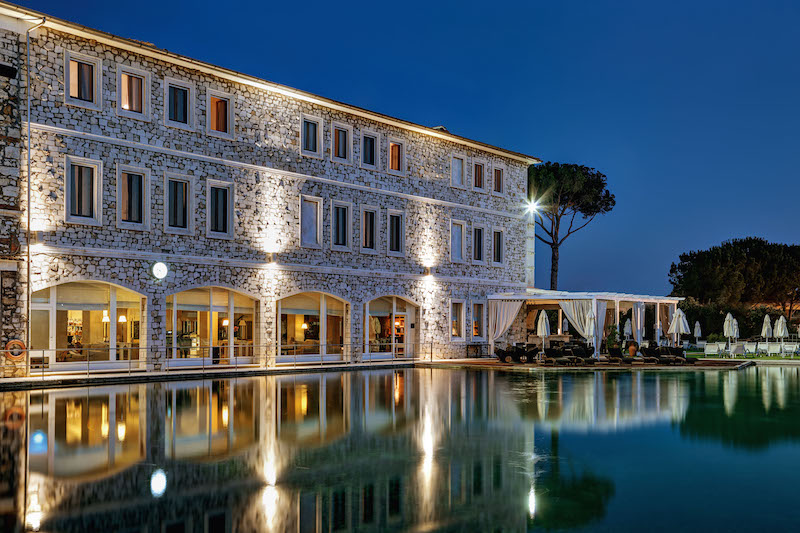 At Terme di Saturnia, the pure spring water – enriched with a high concentration of gases and mineral salts – surfaces in the large thermal pool at the center of the resort at about the same temperature as amniotic fluid, providing a comforting soak. Steeping in the springs, which are constantly and completely refreshed from deep underground every four hours, is said to relieve everything from dermatitis and acne to arthritis and even ailments like tonsillitis and chronic bronchitis. Of course, it’s also incredibly relaxing. The hotel offers elegantly appointed rooms, fine dining and some unique spa treatments inspired by the beautiful surrounding Maremma region. 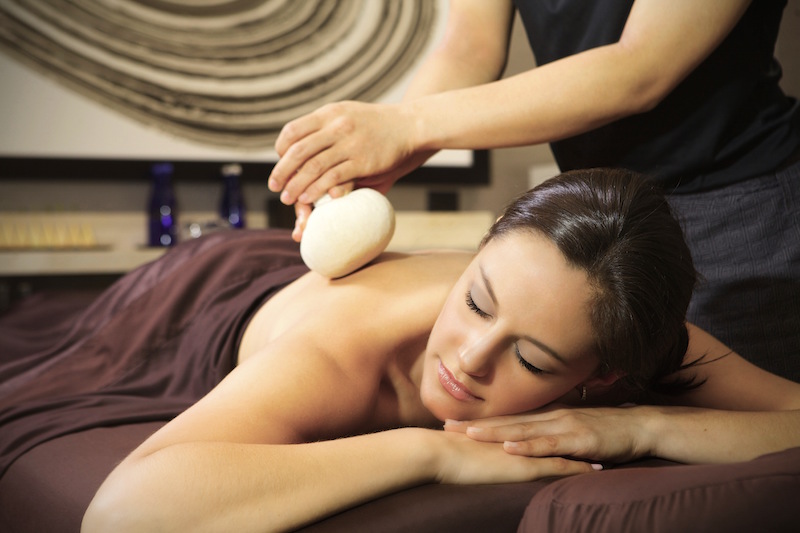 The thoroughly modern Thann Sanctuary Spa, the first in the United States, stands in delightful contrast to the classic grandeur of Castle Hotel & Spa, where visitors feel like royalty in a palace patterned on the great Celtic fortresses of Scotland, Ireland and Wales. Built in the late 1800s for a prominent newspaperman, the edifice was protected as a historic structure in the 1980s, and underwent an extensive renovation in 2013, adding the Thann spa, well known throughout Asia for combining traditional Thai therapies with a wealth of state-of-the-art treatments. Celebrate with a Thann Sanctuary Signature Massage for two, combining classic Thai massage with other Asian healing techniques for a total Zen experience. 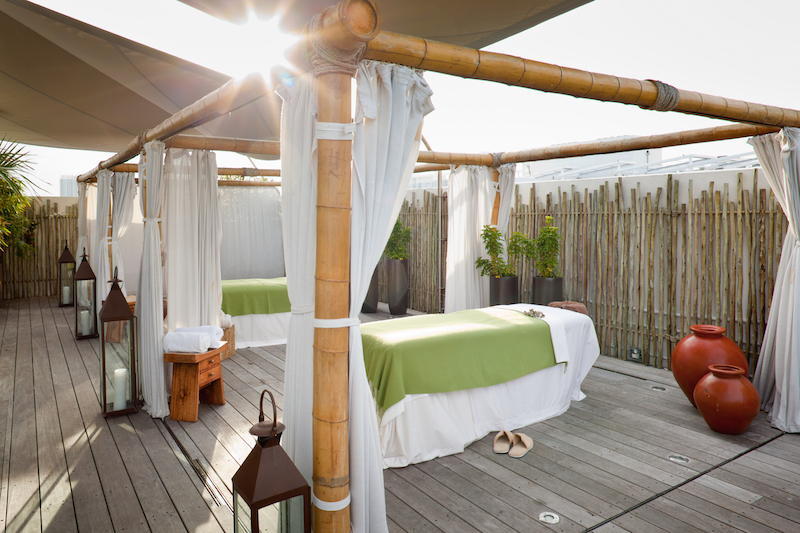 Often found in lists of the top 10 most romantic hotels around, the gracious fun-in-the-sun Art Deco vibe at The Betsy, which opened in 1942 as The Betsy Ross, is fully present in the property’s rooftop spa. The only fully outdoor spa in Miami, The Betsy Wellness Garden & Spa draws upon therapies from around the world to promote health and well-being. Push passion to new heights with the spa’s signature “Massage Under the Stars” – a treatment for two, naturally, illuminated by moonlight in the outdoor garden. The experience, highlighted by mimosa champagne massage oils, music, candlelight and rose petals. concludes at midnight, casting your romance in a whole new light. 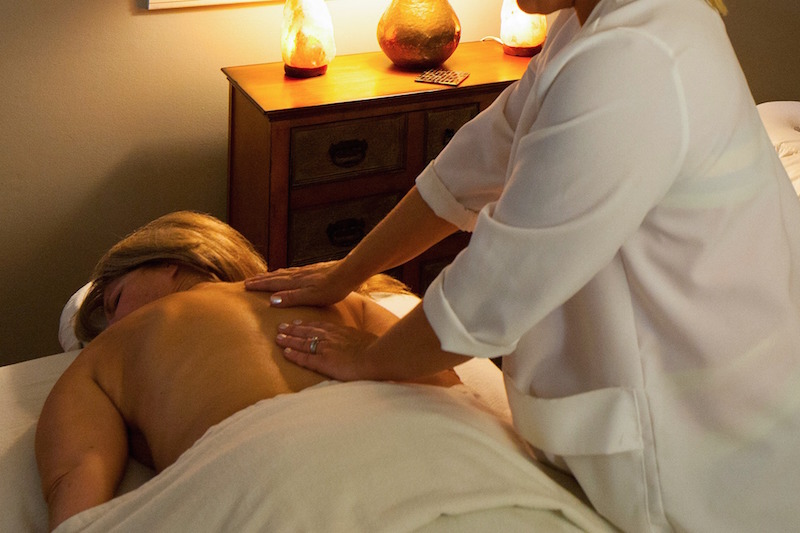 While George Washington never got to experience a signature treatment at Gatehouse Spa, Hillbrook Inn’s luxurious and thoroughly modern wellness center, his aura surrounds the property. Washington purchased 550 acres, including the spot that the hotel currently occupies, with earnings made from surveying at the tender age of 18. One of the buildings dating back to his time can be enjoyed from the property’s breakfast porch, while other historic buildings onsite date from the 1800s, in all their grandeur.

For the ultimate relaxation experience, book the property’s Serenity Suite, located directly above the spa. Amenities include a private two-person sauna, luxurious soaking tub, and walk-in tiled shower with twin showerheads. And when it’s time to enjoy an aromatherapy massage or a healing polarity session, you’re just steps away.

Writer Jeanne O’Brien Coffey comes from a long line of New England foodies – her dad once traded an old car for a dozen Marblehead lobsters. And her grandmother’s whoopie pie recipe is a closely guarded family secret. Jeanne is the restaurant critic for Northshore magazine, a regional luxury publication serving the area north of Boston, and also blogs on food, drinks and travel for ForbesLife. She has poured $1,000 tastes of wine with Kevin Zraly at Windows on the World, studied under Andrea Immer Robinson at the International Culinary Center and sampled Ferran Adria’s catering when he was first mulling closing El Bulli. She loves uncovering the stories behind what we eat and the way we eat it, in New England and around the world. Her work has appeared in Forbes, The Boston Globe Sunday Magazine, Zagat restaurant guides and the sadly shuttered Executive Travel. Jeanne lives an hour north of Boston, and loves the historic architecture of her home in Newburyport.