Located off the tip of Miami Beach and accessible only by private yacht or ferry, Fisher Island Club & Resort is one of the most exclusive private membership clubs in the world, catering largely to the 1300 residents of Fishers Island. This elite community situated on 216 acres represents one of the most expensive zip codes in the US and one of the greatest concentrations of wealth on the planet. Residents have included Oprah Winfrey, Boris Becker, Mel Brooks, and late actress Anne Bancroft. 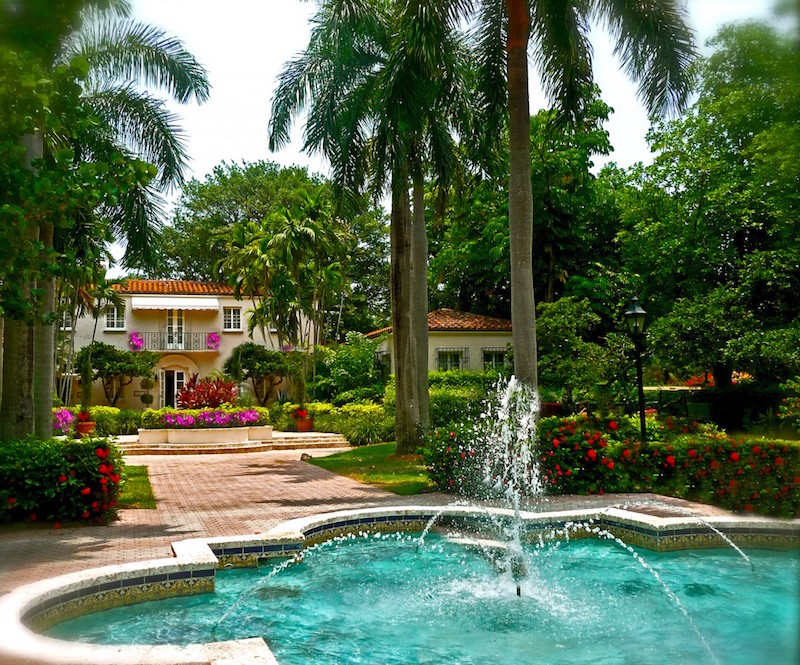 If you don’t happen to have $250,000 to become a member (like myself) and want to get a taste of how the .001% lives, the property offers 15 luxurious overnight accommodations including four Historic Cottages (one 3-bedroom cottage, two 2-bedroom cottages, and one studio bedroom cottage), six Courtyard Villas, and a Guest House with five 1-bedroom Junior Suites.

To put it in the simplest terms, Fisher Island Club is the pinnacle of world-class food and wine, club sports, and exclusivity—because they have to be given their clientele. Guests of the resort have full access to the club’s private beach and beach club, the P.B. Dye 9-hole championship golf course, 18 Grand Slam tennis courts, two deep-water marinas, seven restaurants, a full-service spa & salon, a state of the art fitness center, an observatory for stargazing, and an aviary with dozens of exotic birds.

This tony enclave has a rich history, starting with a Miami developer trading the island for an industrialist’s yacht he long coveted. In 1919, Carl Fisher, the Miami developer who founded Miami Beach, purchased island from Miami’s first black millionaire, Dana A. Dorsey, and formally named it after himself. In 1926, Fisher threw down an offer to trade his island for William K. Vanderbilt II’s 250-foot yacht Eagle, which he had long coveted. To Fisher’s surprise Vanderbilt promptly accepted. In hindsight, it was one of the best deals Vanderbilt ever made.

In 1936, Vanderbilt built a Mediterranean-style mansion on the island designed by famed architect Maurice Fatio surrounded with lush landscaping, guest homes, tennis courts and swimming pools where he and his wife, Rosamund, frequently entertained the luminaries of their time. The Vanderbilt Mansion is now the focal point of the club and the rich history is celebrated in many details found throughout the property.

After Vanderbilt, the property changed hands between several other notable industrialists including U.S. Steel heir Edward Moore and Garfield Wood, the inventor of the hydraulic lift, among others. In 2007, seeking to return Fisher Island to its original grandeur, Fisher Island Holdings, LLC and Fisher Island Club financed a $60 million restoration project including the island’s spa and other facilities to meet the modern day standards of its discriminating residents and members.

We were recently invited to the Club and it was clear from our first minute on the ferry that no detail goes unnoticed or unattended. The club’s bellman Omar greeted us on the other side in his golf cart—which is how everyone gets around the island—and wound us through the resident buildings (one bedroom condos start at $2 million) to the island’s southernmost point. Two peacocks welcomed us to the Club strutting under one of the largest Banyan trees in south Florida. The aroma in the air was the club’s signature perfume, “1936” that celebrates the year that Vanderbilt built his mansion and blends bergamot, tea, orange blossom, coriander, jasmine, and rose with base notes of amber, musk, and sandalwood, creating a fragrance that captivates your senses immediately.

Bernard Lackner, CEO of Fisher Island Club tells me, “Fisher Island is a very special place. We commissioned ‘1936’ as a tribute to our island’s storied past and a way for members and guests to bottle their memories of our paradise, wherever they are in the world.”

The Courtyard Villa we stayed was decorated in a soothing color palette and soft tropical prints with thoughtful details throughout like two different types of soaking salts to choose from to help you either sleep or soak your pain away from a day of activities. The spa bathroom was palatial, reflecting in raw square footage the importance guests at Fisher Island Club place on pampering and relaxation. French doors led out to a landscaped walled-in patio with a tiled Jacuzzi and chaise lounges giving each guest the feeling of having their own private oasis within their own private island.

The next morning Lackner takes us on a guided tour of the property in his golf cart with a “CEO” plaque on the front windshield.

“One of the perks,” Lackner jokes. In reality, though he’s not kidding. Fisher Island Club really does need a CEO—because CEOs and other billionaire-types are the people Lackner is tasked with keeping happy. “We can’t just deliver ‘wow’,” Lackner says, “We have to deliver ‘wow-wow’ for both our residents and equity members and the guests who come to experience the island”.

The Lackner ‘wow-wow’ is an ethos that permeates everything and everyone at Fisher Island Club. And the island’s two indulgent centerpieces, the Spa Internazionale and the Beach Club, are no exception. For a few brief moments of total relaxation, you’re worth millions (or billions) and your every need is not simply catered to—it’s predicted before you even know what you want. Given that half the people on Fisher Island’s beach likely own a private jet (or two), Lackner knows as well as anyone in the luxury hospitality business that this level of personal attention is an art form. And it comes with a price.

“Of course we have a budget,” he says smiling, waving out towards the grass and clay tennis courts. “But it’s a big budget.”

I’m not a Michelin restaurant critic, but I’ve eaten at some of the best restaurants in the country, and there is no doubt that our dinner at Garwood was the best meal I’ve ever eaten. A few of the standouts (future guests take notes): I could have devoured five more plates of the Tomatoes and Burrata (organic strawberries, heirloom tomatoes, pickled shallots, and aged balsamic vinegar) which Arce paired with Claude Riffaut Sancerre, 2014. The Prime Beef Tartare with toast points paired with Miraval Rose cote de Provence, 2014 was out of this world. The Porcini Rubbed Prime Filet Mignon with grilled scallions, sweet potato puree and king trumpet mushrooms was the best piece of beef I have ever eaten. The filet was beautifully paired with DG Vajro, Barolo “ALBE”, Piedmont, 2010.

The essence of the Fisher Island Club experience is captured in these tiny details. No matter how many world-class hotels or clubs you’ve been to, there’s always something that’s not quite perfect because everyone likes things their own way and you can’t please everyone. But somehow Fisher Island Club manages to get it right everywhere, every time. Case in point: turn down service, which I typically wouldn’t even mention at any hotel. But every evening at Fisher Island ends with a tray of handmade desserts that I didn’t even know that I wanted. Because that’s what billionaires demand.

Editor’s note: This article was previously published on Forbes. All photos are courtesy of Fisher Island Club & Resort.