Adventures in Preservation was founded in 2001 by two women with a great love of historic buildings and a strong desire to travel and understand the world. While perusing the travel section of the Boulder Bookstore, the Volunteer Vacation section suddenly brought everything into focus. Judith Broeker and Jamie Donahoe combined their goal of saving historic buildings with the concept of experiential travel, and created AiP’s hands-on preservation vacations. - See more at: http://www.findeverythinghistoric.com/adventures-in-preservation-90#sthash.v6lVjpfq.dpuf 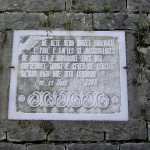 Albania held a certain mystery and often an aura of danger for hundreds of years. From Skanderbeg leading a fight for freedom in the 1400s to over 400 years of Ottoman rule to 50 years of cruel oppression under a hybrid Communist government, Albania has lived up to this billing.

Adventures in Preservation (AiP) first took on a project in Albania in 2008, eighteen tumultuous years after Albania was opened to the rest of the world in 1990. Progress has been erratic but is being made and by the time of our arrival, travel was relatively safe if still a bit crazy.

As AiP program director, my first trip to Albania was made by car, 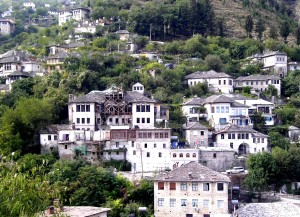 driving  from Slovenia along the Croatian coast, a fast trip greatly enhanced by a stop in the amazing fortified city of Dubrovnik. Traveling south we entered Albania and found there were two speeds – the legal limit and faster if you compensated the right person. We found this out after going the speed limit, being passed by many cars on the new 4-lane highway, and deciding to try the fast lane ourselves. Within minutes, a policeman in the distance – on foot, believe it or not – stepped from the side of the road into our lane and held up a stop sign, the kind I was familiar with from the grade school crosswalk. We managed to pull over and, due to the charm and good looks of my friend who was driving, escaped with only a warning. I have been back to Albania two times and each time been pulled over at some point. Maybe I’ll learn my lesson by the next trip, coming up in May. 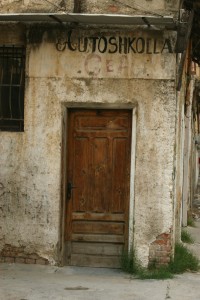 We proceeded to the southern part of Albania, often on two-lane roads in need of repair. The practice was to drive in the middle of the road, which was in relatively good condition, and only move over if someone was coming directly at you. Fortunately, a number of driving schools have opened in Albania’s larger cities and roads are constantly improving, so it’s now much safer although not nearly as exciting. That will be my last driving story. As of 2014, Albania is quite safe and most of the warnings included in guidebooks can be ignored.

Arriving in Gjirokastra, Albania for the first time was like driving into a beautifully illustrated history book. The old city is on a very steep hill and the drive up vacillated between my mouth hanging open in amazement and laughing hysterical and mostly in fear as we tried to navigate the vertical cobblestone streets without coming to a stop for fear our stick shift would lose its grip. Oh dear, I promised no more driving stories.

Old town Gjirokastra was built around the bazaar, filled with 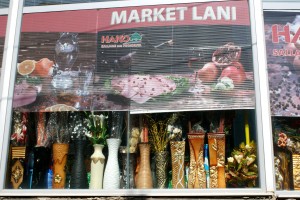 interesting shops and restaurants. The historic area is dominated by Ottoman-era tower houses, from two to four-stories tall and each built from approximately 3 million stone. The interiors are decorated with intricate woodwork and decorative painting with many rooms connected by archways, hidden passages and carved doors. This was the reason we had come to Gjirokastra – to help stop the loss of these utterly remarkable buildings. 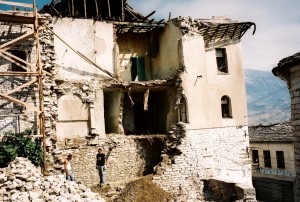 Since 1908, when the Ottomans left Albania, money has been scarce and little maintenance was done for the next 100 years. Even when built of stone, once a hole develops in the roof, the area’s torrential rains can bring a house down within one year. About a third of the historic tower houses have collapsed and many that remain are deserted and unstable. Our group was in Gjirokastra to complete a project at the request of the city government, which was to document a great variety of inscriptions found on buildings and gateways. These are rapidly being lost as repairs are made or buildings are lost, and they represent the history of the area and the diversity of religions and governments.

Since that trip, I have returned to help with conservation work on several of the houses and have explored the old town’s steep walkways and donkey paths, having the good fortune of being invited into a number of the historic houses. Since my greatest loves are photography and exploring deteriorating buildings filled with history, I often had trouble believing it was real.

A number of people and several organizations around the world 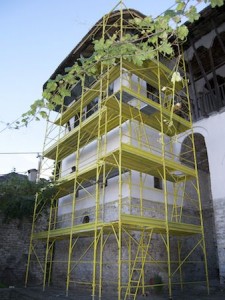 share my feelings, and have joined initiatives started by the residents of Gjirokastra to save and maintain this UNESCO World Heritage site. New building conservation projects have been developed by a  Balkan organization, Cultural Heritage without Borders, and results can be seen at the Babameto house taken from partial collapse to fully restored and now serving as an affordable bed and breakfast for tourists. The Skenduli house once housed the very extended Skenduli family, was then made the home of eight families during the Communist ere, was taken over by the government and used as a museum in the 1980s, and is once again being lovingly cared for by the Skendulis. Work is ongoing with the assistance of many volunteers, and Mr. Skenduli is pleased to provide tours to all interested tourists. His pride is obvious and the tour will illustrate why.

I’ll be heading back to Albania in May to work on the Skenduli house and see the progress made across the country, but also in hopes that the remarkable history of this region will not be lost to demolition and questionable new construction. Albanian’s need development and often don’t agree with an outsider’s love of decrepit old buildings that are miserable to live in. My hope is that a compromise is reached so that others arriving in Albania for the first time will experience the amazing culture shock I hold as one of my fondest memories.

Judith Broeker is co-founder of Adventures in Preservation (AiP), which was preceded by her own company, Preservation UnLtd. She is a materials conservation specialist with both research and hands-on experience gained at historic structures in the United States and abroad. For her, nothing is better than exploring a historic site with camera in hand.