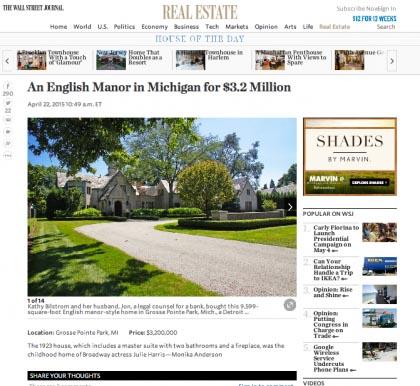 Kathy Bilstrom and her husband, Jon, a legal counsel for a bank, bought this 9,599-square-foot English manor-style home in Grosse Pointe Park, Mich., a Detroit suburb, as a place to retire. Built in 1923, it was the childhood home of noted Broadway actress Julie Harris. The Bilstroms moved into the house the same month Ms. Harris passed away, in August of 2013. The architect left his initials and professional signature on a high corner stone of the house, as well as the initials of the original owner, Ms. Harris’s father, William P. Harris. Architect Hugh T. Keyes later designed an addition to the home, according to listing agent Kay Agney.