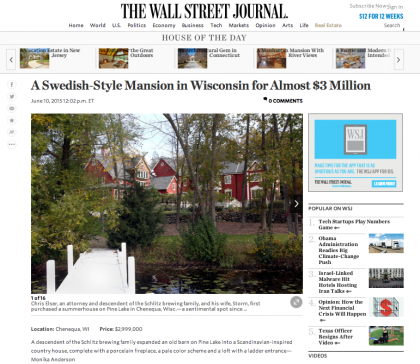 Chris Elser, an attorney and descendent of the Schlitz brewing family, and his wife, Storm, first purchased a summerhouse on Pine Lake in Chenequa, Wisc.—a sentimental spot since his grandparents had owned property there—in 1995, when it was a much smaller barn. Two renovations later, the house is a 10,443-square-foot tribute to Swedish architecture.

The couple, who began living in the house full-time in 2007, put in extensive research to design the home, which they say is located on what was once the first Swedish settlement on Pine Lake. The exterior is ‘very typically Swedish,’ says Mr. Elser. The falun red color, common in Swedish country houses, weathers well, Ms. Elser adds.