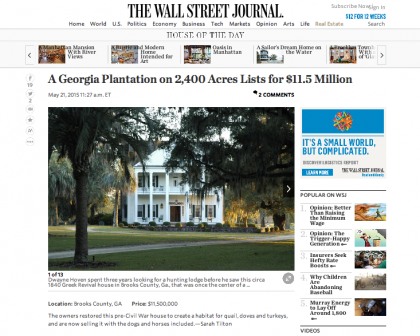 Dwayne Hoven spent three years looking for a hunting lodge before he saw this circa 1840 Greek Revival house in Brooks County, Ga., that was once the center of a cotton plantation. ‘He came home and said, ”You’re not going to believe this, but I’ve fallen in love with a pre-Civil War house and there are no trees and no hunting and no lodge, but I can make something out of it,” ‘ says his wife, Mary Louise Hoven.

The Hovens put together the 2,388-acre property, which is partly in Georgia and partly in Jefferson County, Fla., in two separate purchases in 1999 and 2000 and then set about restoring both the house and the land. The property, which is known as Hickory Head Plantation, includes two fully stocked lakes for bass fishing, dog kennels, three barns, and habitats for wild quail, turkeys, doves and ducks. Mr. Hoven, age 73, the former CEO of drug store chain Revco, says his favorite memories of the house are ‘of being together with friends and story telling and laughing.’