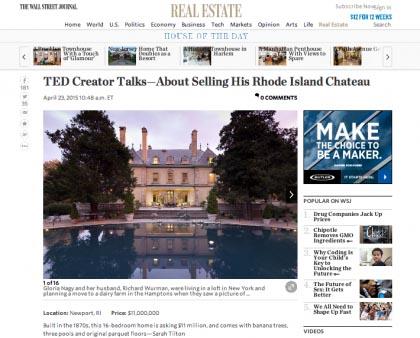 Gloria Nagy and her husband, Richard Wurman, were living in a loft in New York and planning a move to a dairy farm in the Hamptons when they saw a picture of this Newport, R.I., house in a magazine with the words ‘For Sale by Owner.’ They had to see it: ‘We thought, ”What the hell—we’ll see if it can be for real,”’ says Mr. Wurman, an architect, designer, publisher, cartographer and creator of the TED conferences. The couple drove to Newport on a Friday in April of 1993, toured the property on Saturday and the following Tuesday paid $2.2 million for the 11,338-square-foot house built in the early 1870s.