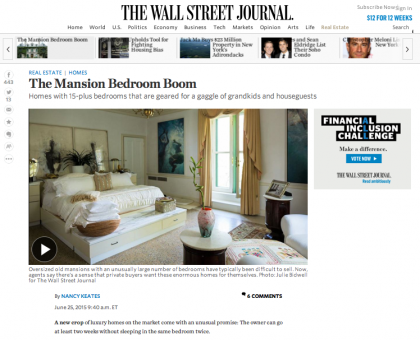 A new crop of luxury homes on the market come with an unusual promise: The owner can go at least two weeks without sleeping in the same bedroom twice. In Newport, R.I., a 16-bedroom home called the Orchard is on the market for $11 million. The property, which also has 13 bathrooms, is owned by architect Richard Saul Wurman, best known as the creator of the TED technology entertainment and design conferences, and his wife, Gloria Nagy, a writer. The home’s many bedrooms were a selling point when he purchased it in 1993 for $2.2 million, said Mr. Wurman, who has six grandchildren and wanted each of them and their parents to visit frequently. “There’s dignity in each child having their own bedroom,” he says.