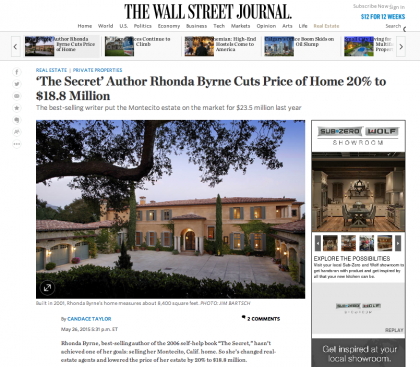 Rhonda Byrne, best-selling author of the 2006 self-help book “The Secret,” hasn’t achieved one of her goals: selling her Montecito, Calif. home. So she’s changed real-estate agents and lowered the price of her estate by 20% to $18.8 million.

In a telephone interview, Ms. Byrne said she switched agents to Riskin Partners at Village Properties because she wanted to “bring in new energy” for the property.

Ms. Byrne is known for her philosophy that visualizing a goal until one absolutely believes it is true can make that goal a reality. She said she could have used that principle to attain her original asking price, if she’d made it a major priority and “put in the time and energy.” Instead, she said she gave a lot of her energy to the in-development film version of “The Secret,” which she is co-producing, because “it’s going to make a big difference in people’s lives.”