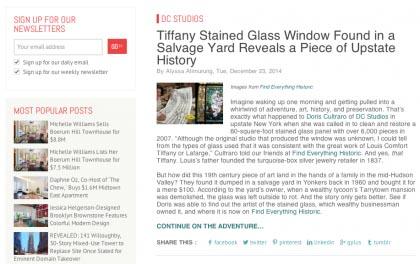 Imagine waking up one morning and getting pulled into a whirlwind of adventure, art, history, and preservation. That’s exactly what happened to Doris Cultraro of DC Studios in upstate New York when she was called in to clean and restore a 60-square-foot stained glass panel with over 6,000 pieces in 2007. “Although the original studio that produced the window was unknown, I could tell from the types of glass used that it was consistent with the great work of Louis Comfort Tiffany or Lafarge,” Cultraro told our friends at Find Everything Historic. And yes, that Tiffany. Louis’s father founded the turquoise-box silver jewelry retailer in 1837.

But how did this 19th century piece of art land in the hands of a family in the mid-Hudson Valley? They found it dumped in a salvage yard in Yonkers back in 1960 and bought it for a mere $100. According to the yard’s owner, when a wealthy tycoon’s Tarrytown mansion was demolished, the glass was left outside to rot. And the story only gets better. See if Doris was able to find out the artist of the stained glass, which wealthy businessman owned it, and where it is now on Find Everything Historic.