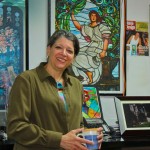 Discovery and history always interface with preservation and there are always backstories that set the stage for life being stranger then fiction. Enter Doris Cultraro, owner of DC Studios—a thirty-five plus year veteran craftswoman in the art of stained and leaded glass restoration and creation, who stumbled upon a restoration project that landed her smack dab in the middle of her own adventure in preservation.

In late 2007, Doris received a call from a local mid-Hudson valley property owner who wanted to commission her to restore a sixty square foot stained glass panel with over 6,000 pieces.

“Although the original studio that produced the window was unknown, I could tell from the types of glass used that it was consistent with the great work of Louis Comfort Tiffany or Lafarge”, says Cultraro. “The quality and details of this window were superlative and very much in keeping with that of the great studios of the late-19th and early 20th centuries. We knew that this was something very special and it was in dire need of careful and painstaking rescue”.

After speaking with the owners, Doris discovered that they had found this treasure in a salvage yard in Yonkers in 1960. The owners were told that the stained glass window had come from a wealthy tycoon’s Tarrytown, New York mansion that had been demolished. Although the glass had been left outside and was full of dirt and grime the new owners knew that there was something special about this piece of art and paid the $100 asking price for it. They took the 10’ x 6’ window home in the back of a pick up truck, where it has now been for over fifty years and will remain within the family’s prized possessions. By the time Doris’s phone rang the large stained glass window was structurally compromised with numerous cracks and pieces missing.

It turns out that the wealthy tycoon the salvage storeowner spoke of was Timothy Eastman (1821-1893), who was best known as the “Father of the Export Beef Trade” due to the fact that he patented a way to ship refrigerated beef from the United States to England. Eastman moved to Tarrytown in 1887 and settled in an area where other tycoons like the Rockefellers, Goulds and Archbolds lived. Eastman built a castle on the banks of the Hudson River that would certainly speak to his success. The property was named “Croydon”, named after his birthplace in Croydon, New Hampshire and had 28 rooms, elaborate woodwork, ornate fireplaces, an imposing staircase with many outbuildings including a conservatory to support his 72 acres of lush gardens.

Eastman was an avid art collector and would often bid on art in both Paris and New York City. Not only did Eastman display his art on his walls he often incorporated pieces into the architecture of his home. On the landing of his staircase was a stained glass window that stood six feet by fifteen feet and depicted a woman holding back a curtain to reveal the light, which was positioned on the east side of the façade of his home to capture the morning light entitled, “Morning”, designed by artist Elihu Vedder (1836-1923).

Vedder was born in New York City where he began his artistic training and later went on to study in Paris and Italy. Eventually, Vedder was hired by Tiffany to design mosaics, statuary and decorative items including Christmas cards. Vedder was known for his creations based on mythology and fantasy and an example of his work can be found today in the Reading Room in the Library of Congress in Washington, D.C. For a short period of time in his career, Vedder ventured into the art of stained glass. A reference for his work in this specialty is the 1882 Art-Nouveau window design of a mermaid for Asbel H. Barney’s home in New York City. This specific design by Vedder is what Tiffany and Company based their production of “mermaid” windows on. Sadly, the Eastman mansion and all of its glory was demolished in 1958 to make room for General Foods Technical center. It was thought that loss included the Vedder window.

Over fifty years later, Vedder’s stained glass window surfaced, and ended up in the hands of Doris Cultraro. During Doris’s restoration of the window, which took her and her partner/husband Conrad two years, her work was published in several local Hudson Valley publications. These publications eventually brought together Doris and author/local historian, Paul M. Barrett, who had somewhat of an obsession in locating the “Morning” window missing from the Eastman mansion. As soon as Barrett heard of the story from his sister who had read about Doris’s window restoration Barrett immediately called Cultraro and insisted that he had to see the window in person.

“You can imagine my surprise and apprehension”, Cultraro recalls, “When I received this call from a man who was breathing quite heavily on the phone in excitement about the potential of this discovery insisting that he had to come and see it for himself and he wanted to see if the following day.”

After speaking with Barrett for some time, Cultraro learned that Barrett had spent the last thirty-five years of his life on the quest to locate this Vedder gem and invited him to her studio, to show him the window while it was being restored. Barrett subsequently accompanied Doris when the window was reinstalled, providing the current owners with photos and history of its origin.

Both Barrett and Cultraro believed that this window is in fact a lost Vedder due to references to it from an 1891 New York Times Article. However, since there were missing pieces from the window and ones that would typically house the signature of the original artist no one can say for certain. The style, the design and the craftsmanship all point to Vedder, but these were just hunches based on industry knowledge and a personal quest. Interestingly, when both Cultraro and Barrett reached out to various museums and experts in the field they were met with disbelief due to the fact that this window was found in a salvage yard store and has been housed in a family’s living room for fifty-years and not in a museum.

A recommendation from a NYC art dealer led Cultraro and Barrett to a 1979 Smithsonian Publication about the art of Elihu Vedder. Within the pages was the original watercolor presentation of the stained glass design of “Morning” done in 1882, stating that it was donated by Vedder’s daughter after his death, to the Speed Museum in Kentucky. Unfortunately,  the Speed Museum has been closed for renovations. Both Cultraro and Barrett will have to wait to see the actual artwork that inspired this window when the museum reopens in 2016.

Regardless of which stained glass studio in fact fabricated this window, what both Cultraro and Barrett do know is that this special stained glass window is a magnificent work of art that was commissioned by a wealthy tycoon who had a pension for art that was lost in its home’s demolition only to be discovered by an unsuspecting couple, lucky enough to find this treasure and make it their own family’s heirloom. The quest to determine the studio responsible for creating this stained glass window is still an ongoing journey intertwined with history, adventure, mystery and intrigue.